I feel the need to write a lighter post today. A week alone with our energetic puppy has worn thin. And, then there’s the online math course my son is taking that isn’t exactly going to plan. Even the weather has been uncooperative with its cold temperatures, gray skies, and even some flakes of snow. So when I emptied the dishwasher this morning, I was not surprised to note that many of the cups had not come clean. We’ll have to wait a few days to find the root of that problem as my husband (our Mr. Fix-it) remains away on vacation with his sister.

I hate to drink from a “stained” coffee cup. So I threw them all – about seven of them – in a sink of hot water with some bleach. Sure enough, ten minutes later they were clean and able to hold a cup of hot tea or coffee, without the stains.

But as I washed the cups, I noted how much of a variety I had. Some had thin rims, ever so slightly turned outward like a soon to bloom rose. These cups are my favorites. I have two that were handmade by a woman who was a nurse that used to work with my husband and threw pottery on the side. I like the color of the mug that is my favorite of the two, how it is shaped and fits in my hand. But, most of all I like the thinner outward turned rim that is easy for my small mouth to carefully sip the hot comforting liquid contained within. The other cup she made is slightly taller and the rim is not turned outward as much. It is also slightly thicker but not too thick. If clean, these are the coffee cups I reach for first in my cupboard.

Then there are the photo mugs we’ve ordered from Shutterfly. The first photo mugs we ever had were bought as part of a fundraiser for our school’s art department. They were from a company called Original Artworks. The company took an image of your child’s 2D art – a drawing or painting – and put it on a white mug. Over time all of these have broken or the images have faded with multiple cleanings in the dishwasher.  I did like the idea though. Having ordered photos from Shutterfly I noted that they also offer photo mugs.  And, now, I have a number of them. I’ve also ordered them as gifts. The ones I have are a few years old and have not faded despite the same frequent washings. Here are two: a sampling of my son’s origami creations covering one, and a panoramic of Kapalua Beach on Maui. Both give me warm fuzzies when I use them for my hot drinkable comfort.

There are two of these spotted black and gray mugs. They are about 30 years old. Again, note the slightly out-turned lip. I like the color too – as I gravitate towards black and gray. We bought these years ago when we were renovating a Federal period house and put in a black and white kitchen with maple cabinetry. They were a “splurge” purchase on a trip to Vermont when we stopped at the famous Bennington Pottery in Bennington, of course! You can see the lovely stamping on the bottom. I have a milk pitcher/creamer that matches.  I like these mugs for nostalgia. But, they are a little small. 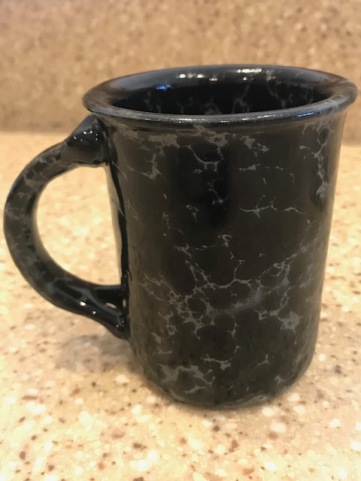 Then, I have a mug a friend gave me. Using it reminds me of her. She moved away some years ago, and while we still communicate (she blogs too), I think of her when I use this mug. 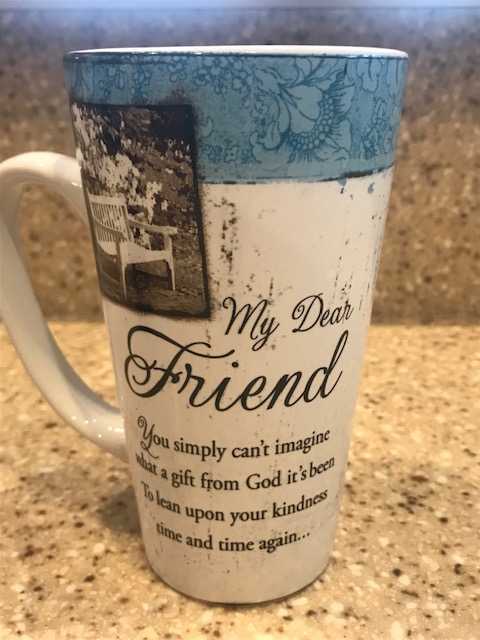 And, then I have mugs I use only when my favorites aren’t clean. These match my Fiestaware and liven up my day with their bright colors. They were a thoughtful gift from my husband a few years ago. However, the lip is fat and the mug is thick. I have to put them in the microwave longer because their size does not allow the liquid to heat as quickly as with the thinner or smaller mugs.

I have been known to buy mugs as a souvenir from a vacation. I have several from trips to Walt Disney World and an expresso cup/mug from New York City. I really have too many mugs for being the only coffee/tea drinker in my house. But, it won’t prevent me from buying more! I love my mugs!