During the pandemic, we’ve gone on some cooking and baking binges. From the early days of being told to stay home and making Naan to just recently when we made Nduja, it’s been a fun way to pass the time, try some new foods, and learn about different cultures.

While our quest to learn the Italian language continues, we thought we’d make some Italian spreads for dinner. This accompanied one of our favorite stand by dips – cheesy blue crab spread. I made the crab dip to be served with crusty bread, crackers, or dried toast bites. My son made a red pepper and onion side called Melted Pepper Spread from the New York Times Cooking page. And, I also worked on the Nduja.

Gathering of the ingredients was almost, but not completely successful. The Njuda has Calabrian salami and pancetta as well as Calabrian red peppers in oil. I was able to find everything but the Calabrian red peppers. Granted, I did not go running around looking for these, but I did not really expect to find them in our area at any grocery store.  The recipe offered a few alternatives one of which was cherry peppers which I knew I could readily purchase. However, they were in vinegar, not oil.  In any case,  the Njuda was easy to make in my food processor. And, it turned out to be delicious as well. 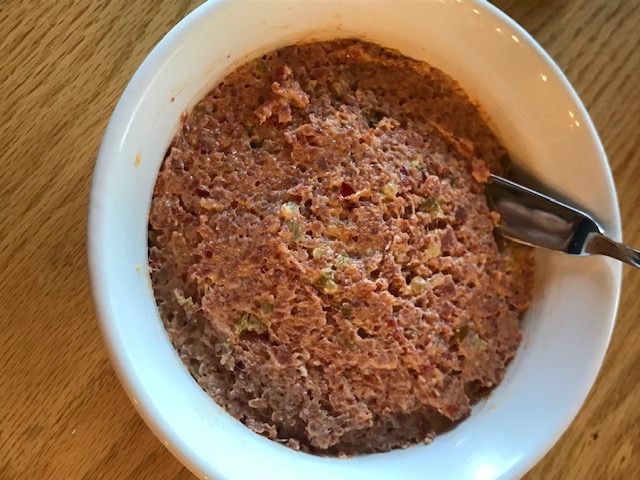 We added two varieties of crusty bread to be cut and spread with our various creations, olives (for me),  and some fresh cut veggies. It was a delicious and, yet, different meal. The Njuda (Salami Spread) recipe can be found on Allrecipes.

Another new dish was made at our cabin last weekend. My husband was able to buy a peck basket of Georgia peaches.  We receive a lot of food magazines at our house and in the latest issue of the Food Network magazine, there was a recipe for a Peach – Plum Galette.  I just knew I had to try it with this batch of peaches, as they were so delicious! 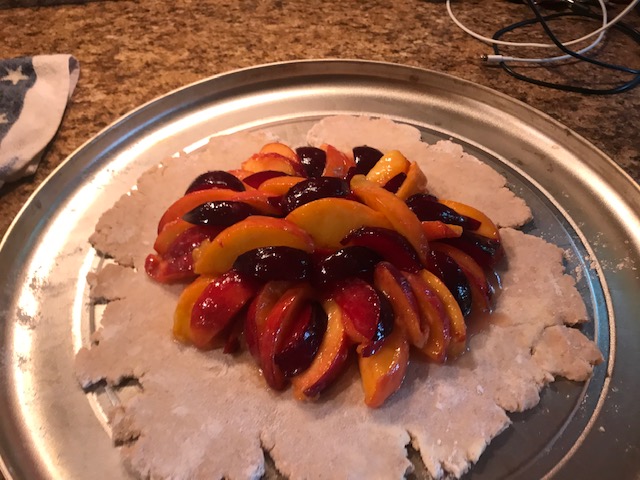 Baking at our cabin does not present many issues, but we did have to do an ingredient check prior to making this recipe. Luckily, some years ago, I had bought a rolling pin to have available if anyone had the desire to bake while there. The galette calls for a homemade crust, with some wheat flour as well as white. We left out the wheat flour and put in the difference (only 1/3 of a cup) in more white. We just did not want to have to store flour that might not be used in a timely fashion. 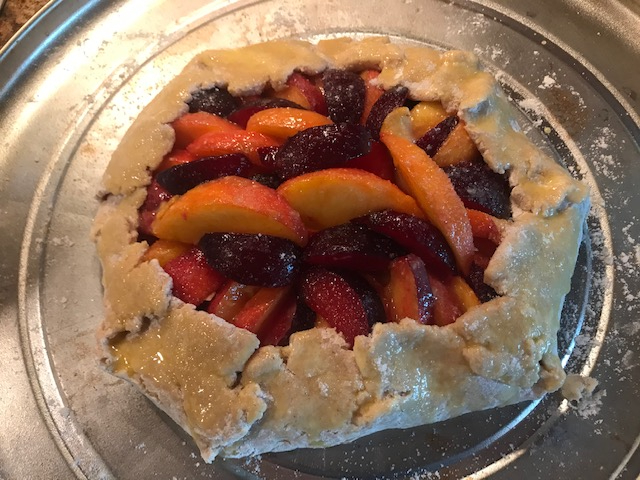 As was the Njuda, the galette was easy to make. And, it was delicious! I will definitely make this dessert again! The few leftover pieces were rapidly gobbled for breakfast the next morning since it was not overwhelmingly sweet. 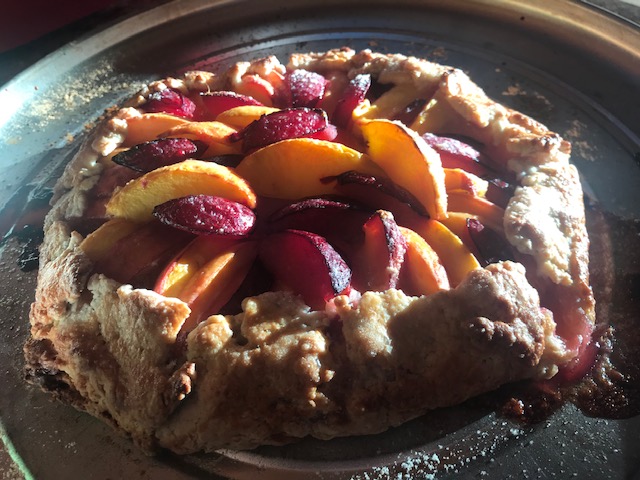 I’ve enjoyed this chance to bake and cook some new food. It’s exciting and energizing to try new things, especially when one has the time to enjoy the experience, such as we do right now.

Our youngest son will finally have his high school graduation next weekend and I am looking forward to trying to make at least one new dish/dessert for that celebration as well.