For anyone who has been to the island paradise of Bermuda, you will know that one of the preferred methods for getting around is the scooter.  We have been to this island three times in thirty years. In that time, we’ve gone from renting and riding a scooter to using the buses, and most recently the ferry system and a taxi cab.  The change in mode of transportation has been influenced by several factors, not the least of which is the island’s population density and crowded roadways.  The other major factors were age, cost, time, and level of risk you are willing to assume.

When we first visited Bermuda, it was 1987.  We stayed at the Elbow Beach Hotel and decided to rent a scooter to get around. It was just my husband and I, newlyweds. We rented from the scooter shop right at the hotel, after getting a quick lesson from the native gentleman in the parking lot.  The only warning we got was not to carry things in the front basket, “for your protection” – as he put it to us!  We got around the island easily, not having any navigational problems, and were able to get to each of the far ends, as well as the City of Hamilton. The only problem we ran into was being caught in some rainstorms, during which we had to “hideout” under a vie-dock.  I do not think we rented the scooter for the entire week, maybe three days. It was fun, memorable, and cost-effective. Nothing bad happened – no accidents, nothing stolen, no falls. In short, it was a great mode of transportation for our twenty-something year old selves.

Twenty years later, in 2007, we returned to the island with our three boys in tow.  We knew before arriving that we would not be renting a scooter or scooters. None of our boys were old enough to drive. We opted for five-day bus passes for each of us that allowed travel all over the island on the pink Bermuda buses by just having a card punched by the driver.  I believe there was a child-rate that saved us some money.  On that visit we stayed at the Fairmount Southhampton Resort. There was (and still is) a bus stop at the base of the hill in front of the hotel. I think it is for the #7 bus. It was convenient and allowed us to still easily get around. The native Bermudians are gentile, lovely people. Riding their bus system is easy and they welcome visitors on their public transit system without prejudice, hostility, or much judgement on any of your ineptitude. If you are unsure, ask! Any number of Bermudians will tell you what to do! But, be sure to be polite! No one likes a bold and crass tourist. Remember, it is their country.  You are the visitor. The buses offer a safe, fun, easy, and affordable way to get around the island. I do believe it was our boys’ first experience with a public transit system. 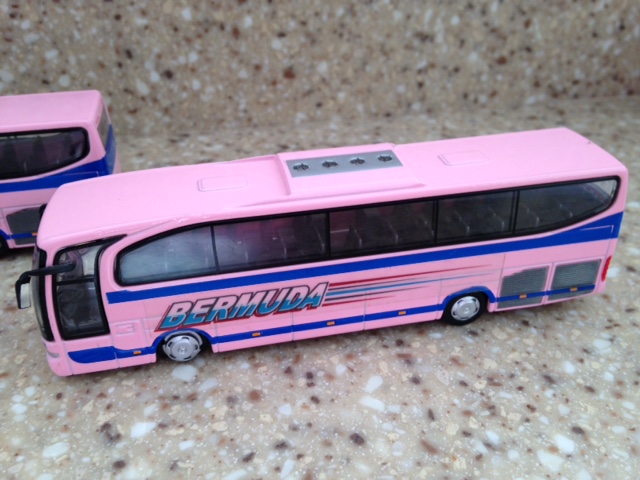 My husband and I returned this past August, in 2017.  Again, we did not intend to rent a scooter. When we visited with our sons, ten years previous, we saw the greatly increased traffic and congestion as compared to our first visit in 1987. We expected, and were not wrong, that the traffic would be as bad or even worse. This time we elected to use bus tokens, bought from the hotel concierge, as well as the free ferry from the hotel dock to Hamilton.  We purchased commercial ferry tickets to get us from Hamilton to the Royal Dockyard one day and another day took multiple buses reach the town of St. George’s. You can ride different ferry lines to St. George’s but our concern was getting back to Hamilton in time to get the free hotel ferry back to Southhampton, which left at 4:45 p.m. We happened to travel to St. George’s on a Bermudian holiday which closed most of the stores in Hamilton. This gave rise to a slight concern about bus transportation but the main terminal was still open and functioning, although it did look like the fleet was abbreviated that day.  It all worked out and we even remembered to ask for our transfer when we exited the bus which would allow us to get on another line, taking us to a different part of the island.  The buses are really convenient when you stop some place like the Swizzle Inn and have a pitcher of the island’s famous rum concoction mid-afternoon!

We had one occasion where we took a taxi on this last trip. I had pre-booked two dinners for our week-long stay on Bermuda via Open Table.  One was for a Wednesday night at the Hog Penny Pub in downtown Hamilton. During the summer tourist season, the City of Hamilton hosts Harbour Nights once a week on Wednesdays. This is basically a huge street party, complete with a parade, Gombey dance troupes, food vendors, and local merchandise all on Front Street (which is closed down) from  7 10 p.m..  Since we had early-ish dinner reservations, we asked our concierge about getting back to the hotel when front street was closed. She told us to look for the taxi stands along front street and just hail a cab. Just to be prepared, we asked her how much the fare should be from downtown Hamilton to Southhampton.  We were quoted $30 – $35.00.  Buses do run on Wednesday nights, but she said to expect a very long wait due to the large crowds at the weekly festival.  We enjoyed our dinner at the Hog Penny and strolled with the parade which was not put off by a few rain showers, but by 8 pm we were ready to head back to the hotel and really did not find more than one taxi stand – on the street that was still closed.  My husband had the great idea of walking to the Hamilton Princess Hotel, just  a short stroll from downtown on Hamilton Harbor.  This is the sister hotel of the Fairmount Southhampton. There we used the bath room facilities and chatted with the valet. He called a cab for us. It did take about 30 minutes for the cab to arrive but it was spent pleasantly chatting with the 19-year-old Bermudian valet.  Our cab arrived and drove us back to Southhampton. The fare was just what we were quoted, and of course, we tipped both the valet at the Princess and the cab driver. But, we had a nice quiet ride back to our hotel. If you can afford it, the cab was a wonderful way to travel on Bermuda as well, especially at night.

Regardless of the mode of transportation, we were able to travel the length of the island on all three trips without difficulty. No one should be in a hurry while vacationing on Bermuda. So, if it takes 30 minutes or more to get to Hamilton or St. George or any one of the beautiful beaches, so be it. Just it back and enjoy. Let the Bermudians do the driving for you! Unless you are going to rent a scooter, this is what you have to do anyway – tourists cannot rent cars.

After this last trip, were we experienced a great deal of congested traffic on the roads. We feel the ferries, buses, and taxis are the way to get around on the island of Bermuda.  When we were younger, the scooter was fun, but it seems there was much less traffic.  It is not unusual for tourists to be involved in scooter accidents, either. In fact, when we were returning from our day at Tobacco Bay and St. George’s, we saw how easily a traffic accident can happen!  The roads are twisty and crowded, many butted right up against edges of limestone and volcanic rock . Locals beep their horns at each other to say hello. This can be distracting and not meant as the usual insult a blaring horn can mean in the U.S..  One must also remember to drive on the left, as they do in the U.K., not the U.S.. Drivers, especially visiting tourists, can be impatient and be seen attempting blind passes if the traffic is not moving along at a pace akin to their liking. Unfortunately, this all spells disaster for more than few drivers each year, who find themselves in the Emergency Room of King Georges’s Hospital rather than laying on the quintessential pink sand beach.

Going to Bermuda? Leave the driving to the Bermudians, sit back, and enjoy your trip!