Today was the day I had scheduled to drive down The Great River Road, or State Highway 35, to deliver my handcrafted jewelry to an art gallery to which I consign it for the tourist season. I had told them on Monday that if the weather was bad, I would have to reschedule, as there was an impending storm.  But, as you never can tell with the weather, I waited until this morning to figure out if I would go or not. The gallery manager was fine with that decision.  Well, by 7 a.m. this morning, nothing was going on. We lost some partly sunny skies to a solid gray over-cast but other than that nothing seemed imminent. After a quick check of the local radar, I decided to go. By 8:45 I was nearing the stretch of 35 that heads out to more rural towns south of where I live.  The sky had decidedly darken and looked ominous – almost like a winter sky. Driving was fine; the roads were dry and clear. The Mississippi River channels were open, with the ice that usually blocks the flow during the winter, now completely gone. I spied a few bald eagles, many ducks, and even a squadron of American White Pelicans hunkered down in a shallow pool, barricaded off by a knoll from the eastern channel of the river. Unfortunately, there was not a safe place to pull of to snap a photo of these interesting and large birds.

About ten miles out from the end of my destination, it started to snow. Actually, it was sleet. Here we go. The storm was moving northward. By the time I reached McGregor Iowa, which is a small town that sits right on the edge of The Great Muddy, the roads had turned white and crunchy.  I was glad I had arrived but was slightly worried about the return trip home.

The gallery managers were happy to see me, but slightly surprised as well. I said, “I guess I should have called you before I started out to check and see what was going on here with the weather.”

“That would not have helped,” one replied, we had sun this morning!

We quickly ran through my inventory, double checking the numbers and prices against the form I had filled in less than 12 hours previously. There is no cell service in this town, at least for my carrier, so I had planned to stop at a local burger joint to use their WiFi and have lunch before heading back, north.  Well, the burger joint was closed – under re-construction. So, it was suggested that I stay right in McGregor and have lunch there – right across the street from the gallery. Great little spot – The McGregor Cafe – I have eaten there a number of times and it always seems like a treat. Today, was no different. But, no WiFi. I had been mis-informed. I ate my sandwich and watched the snow come down gently.

Soon, it was time for my trip home. As soon as I got back onto the road that runs adjacent to the river, I knew it was going to take me longer than usual to get home. My first shocker was a barge on the river that I barely noticed because the air was so dense with snow. What a gorgeous photo it would have made, to picture that barge, no more than a few hundred feet away from the edge of the road, gliding gently through the open water with snow flakes in the air. But, alas, again there was not where to stop and safely park to take a photograph.

As I drove across the bridges the separate Iowa from Wisconsin, I knew that this was going to be an interesting two hours. No plows, snow accumulating, ice under the snow, and of course, some people going too fast. I was not far out onto highway 35 that runs next to the base of some bluffs on one side and the river on the other when I realized I could not see the river at all!  Luckily, it seem that everyone was driving carefully, a tractor-trailer stayed far behind me, even though I was only going 38 in a 55 mph zone. Every time the car accelerated past 40 mph, it swerved due to losing grip on the icy road. I backed of on the gas pedal every time. More than once I was thankful to have grown up in Western New York, where one was met with this weather and these road conditions more than once each winter. I knew I was a capable winter driver – even in my little sedan. I just had to stay alert, keep in the grooves the cars before me made, have my lights on,  and stay well back of anyone in front of me. It was going fine until 30 minutes in, the tractor trailer sped up and passed me – in a NO PASSING ZONE – splashing muck, snow, ice and water all over my windshield in amounts that prevented me from seeing – ANYTHING!  You can be sure I had some expletives for that guy!

After that, he stayed within sight of me all the way back to our home county – probably another  50 to 60 miles. I wasn’t sure of his purpose in passing – he nearly pushed me off the road with his actions! There was one more time that I was fearful on the drive and that was when my car slid on the road for no apparent reason – just an icy spot – icy enough that at 38 mph, I fish-tailed!  And, the car behind me, fishtailed, too!  Oops! And, so did that silly tractor trailer! It was icy! 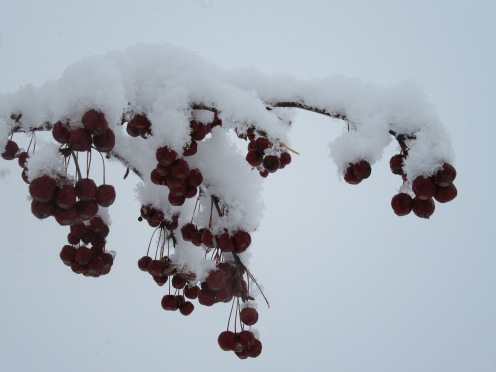 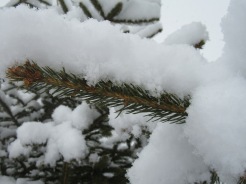 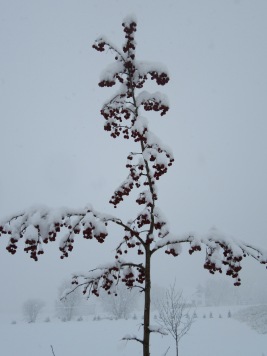 Yup, there you have it! On April 18th in Wisconsin and Upper Iowa we had a snow storm. It wasn’t so great.