No one realizes how dependent on, or abusive of,  water you are until you do not have it. This is the situation in which my family now finds itself!

Here is our story….

Yesterday, my husband spent most of the day re-grading part of our front yard. There was a mis-hap with herbicide this year and it killed everything in certain areas of our grass – along the driveway, around the garden perimeters, and around the young Norway pines that we put in as a privacy fence and wind break two years ago.

We are still trying to figure out what happened to cause that problem. Either it was a wrong dilution or the sprayer malfunctioned, dumping more than it should have in certain areas. This is only loosely related to the story of our well, but sets the stage in that since parts of the yard was roughed up and regraded with new grass seed, it needed to be watered in.  And, this is where things start to go awry. My husband dragged our hoses out to the very front of the yard to sprinkle the new grass seed. It seems strange to be doing this as we’ve had so much rain this spring. But, the ground was dry after two and a half days of beautiful, sunny weather over the weekend. I had just thrown in a load of wash – a never-ending job in a house with two athletic young men. After starting the washer, I went outside to plant some more of my annuals. As per usual, my own gardens came after planting the school garden in the spring. It’s not a big deal since it’s been this way for 15 years now.

As I planted, I also needed to water in the freshly potted up plants.  Soon, my husband approached. He said, “Something is going on with the water pressure. What do you have running?”

“I started a load of wash,” I replied, some what irked.  “And, I have been watering my plants – they’re dry.”

He walked away trying figure out if there was a problem. Later in the evening, my son came out to our television area and asked what was going on with the water  pressure. He had to get out of the shower because the water pressure had dropped so low, he could not finish.

My husband, who admittedly was tired from working on replanting the grassy areas destroyed by the herbicide, got up and went to investigate the filter we have on the water pump. It occasionally gets clogged with iron deposits.  So, at 9:30 last night he was scrubbing the iron filter on our water pump.  We went to bed hoping the problem was solved. But, alas, it was not.

Up early, my husband shaved, not having a problem with the water pressure, I would imagine he felt relieved.  I got up shortly after and started a shower. I wanted to get in the bathroom before our teen boys since I had to be at work this morning. I planned a quick shampoo, wash, and rinse to be out in less than ten minutes. Well, in less than the time it took to barely wet my very thick head of long hair, probably 2-3 minutes, the water pressure fell off and stopped running altogether! Definitely, not good and not a great way to start a Monday!  I got out and informed my spouse. Grumbling, he got on it!

I did not see him again until this afternoon. But, I called. Our well had run dry! We would have to have a new one installed! A new well would take several days to drill and install. This meant that we would have no water (at all) for the next 4-5 days!

I stopped at the grocery store to stock up on the way home to get a water supply.  I am sure it is the first trip of many for things that we take for granted in our everyday lives. 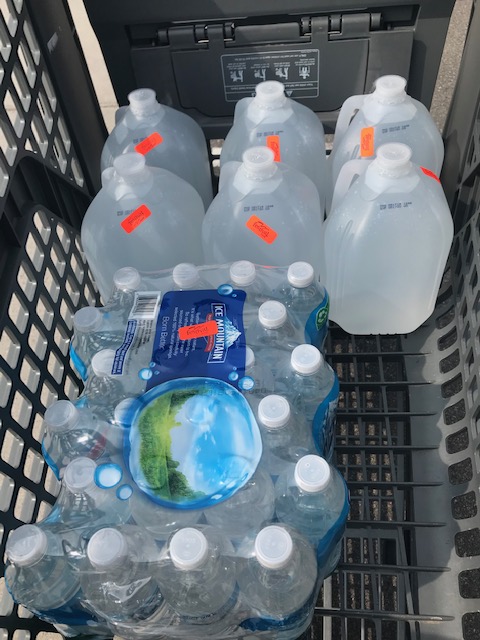 It will be an interesting week.  I just returned from grabbing a shower at our YMCA – I knew we had that membership for something!!!

Stand by! There’ll be more stories to come.