What do you imagine?

You are going into the highest government building in your country. It is where your leader resides. What do you expect? What do you imagine? What do you hope for?

Is is going to be all pomp and circumstance or folly? 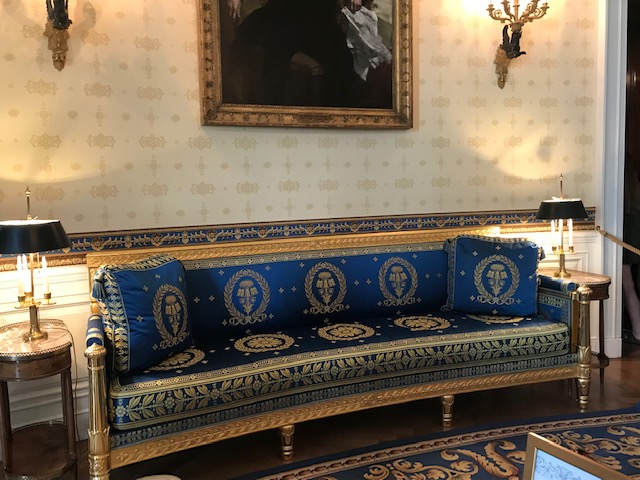 I first entered the White House in 1973 at the age of ten. We had taken a trip to Knoxville, TN to see our second cousin who was a wildlife biologist (complete with bear scat in her refrigerator)  and decided to stop in Washington D.C. to tour the White House on the way home. This is the way I remember it anyway. When I asked my parents, they remember it as being two separate trips.  It really doesn’t matter. I visited the White House for the first time in 1973. 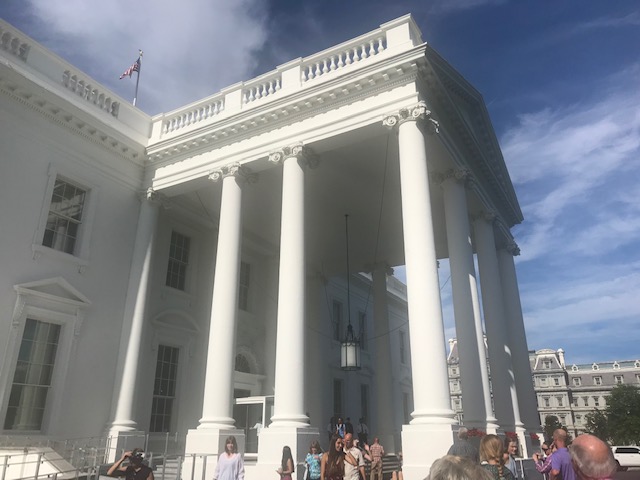 1973 – I do not remember much of the White House tour. Perhaps, I have a vague memory of standing in a long line in the heat. I have a more vivid memory of staying in a seedy motel with a dirty pool.  I am sure there was only minimal security, maybe some guards and secret service, but certainly not the scanners, presentation of documents, and repetition of those events several times over before you enter. Somehow I ended up with a signed photograph of Nixon.  I am sure it is stuck away with some of my other memorabilia. I have to admit that while I don’t condone any criminal activity, I feel a little defensive when someone trashes Nixon. I think it is because there were some good things Nixon did, such as establishing a relationship with China and instituting a what was thought of as a “broad environmental program” as well as the events he resigned over in 1974. Please see his White House Bio for more. 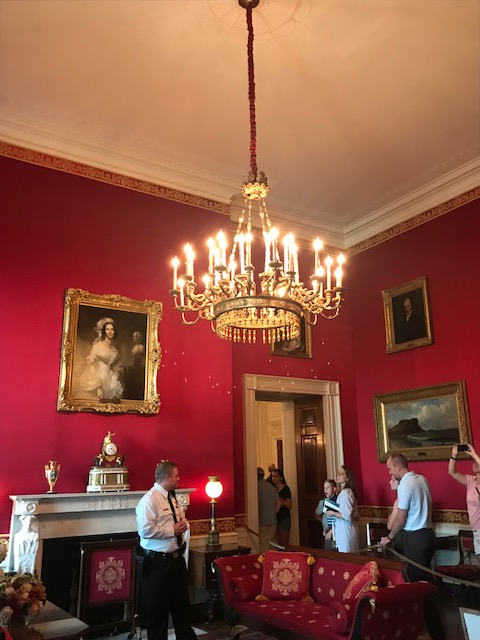 2010 – I was fortunate to go to D.C. with a school group that included one of my sons.  There were were able to tour many of the famous landmarks, included the newer memorials that were not there in 1973 such as the WWII memorial. This trip is memorable for being able to view the monuments at night and staying at University of Maryland in College Park for the National History Day Competition at the national level. I also learned (from a beloved teacher) how to use the metro rail system, which came in handy on our recent trip.  I also remember my son falling into a lady’s lap when the metro rail lurched forward.  And, being pushed up the aisle during an attempt to get off at a certain stop on our way back from Arlington Cemetary. People knew we needed to get off and told us that we just had to push our way forward – they gave us a little help, too! We were not able to visit the White House on this school related trip, but it was not missed. Five days were filled with many activities and we came away with great memories. 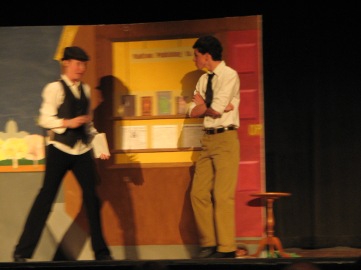 2015 –  A few years ago, we went to  D.C. with our youngest two boys. They were 12 and 14. We drove. We did a lot of walking. A LOT!  We did not drive or ride the metro for the three days we were there.  But, again, we did not make it to the White House. This would have been the Obama White House.  Instead, we stared through the wrought iron fence at the kitchen garden and climbing wall on the grounds.  Then, we went to The Mint and made it to the Holocaust Museum, as well as the Air & Space Museum. We were able to go up into the Washington Memorial which has great views and was not under repair at this time.

2019 – That brings us to our trip a couple of weeks ago. I found myself in D.C. for the fourth time in my life. As part of this trip – a trip for the winners of the Congressional Art Contest – we were asked if our family would like a White House tour and a Capitol tour arranged by our Congressman’s office. We accepted. The reception for the art contest was one day and the tours were on the next. This meant that we needed to be at the White House kioske by 7:45 a.m..  Getting up early on vacation is not fun for anyone. I did not sleep well which is a usual occurrence when I am in a hotel. But, we made it to breakfast and made it to the kioske in plenty of time.

The line was long already. We showed the first guard our passes (which are called invitations). Then, we waited. The line moved slowly. It was hot and humid. Finally, we were asked to show our government issued identification. We used driver’s licenses. This was only the first of four security stops before we snaked our why through makeshift buildings to get in the White House. 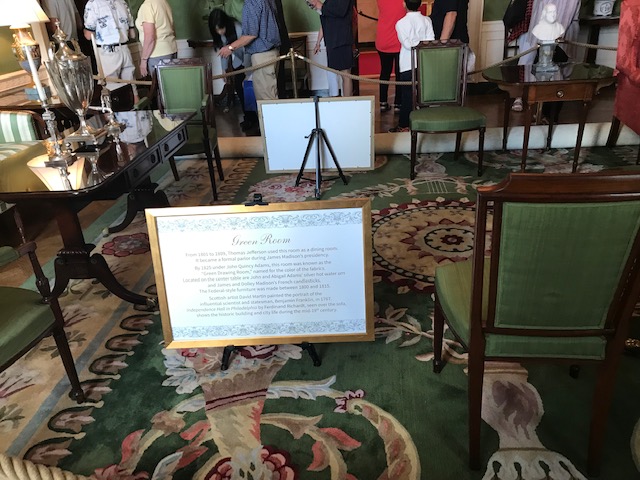 The tour is self-guided. But, it moves slowly as you really cannot get around the people also touring at the same time.  So, you go slow. You look. You read. You notice. Of course we saw the Green room, the Blue room, the Red room, and the East Room. There are security guards (secret service) in the rooms. The gentleman in the East Room was most informative. The other guards did not say much except to warn guest to not touch the walls (the girl in front of us was reprimanded) or tell people to address the President by his title not just by his last name. 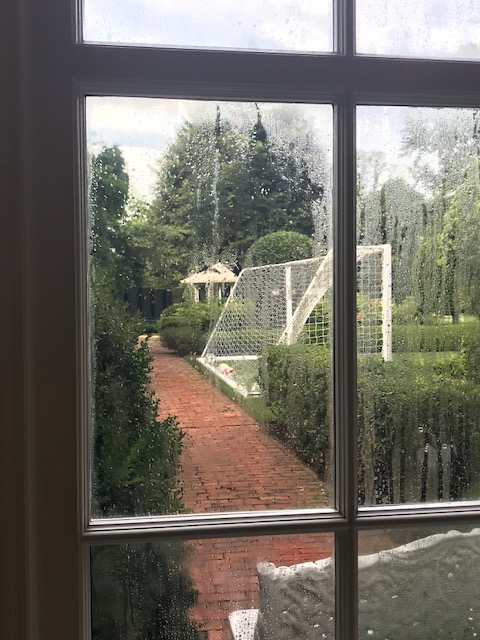 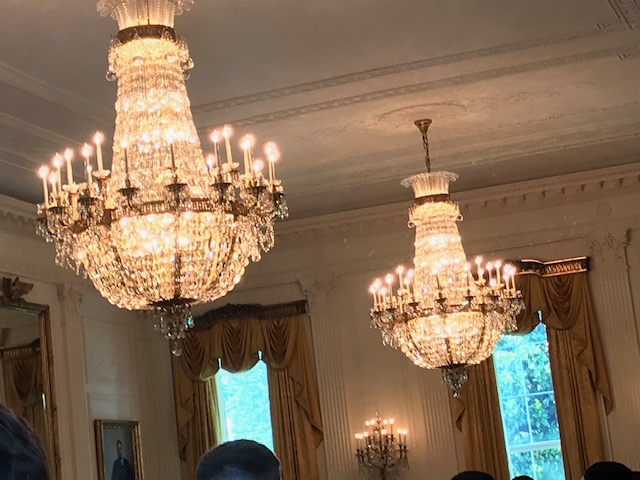 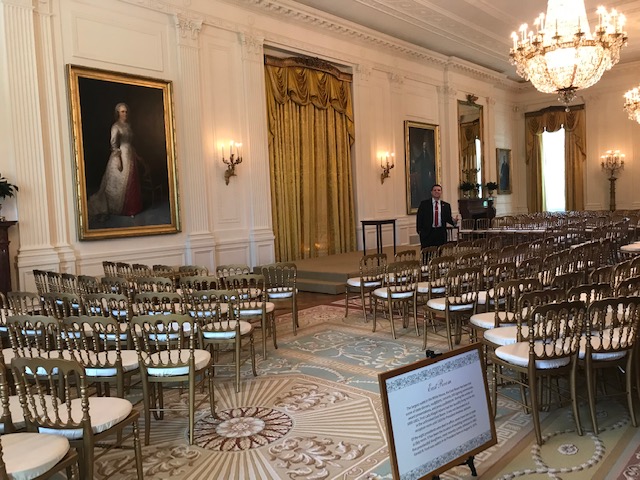 The things we found interesting were not the furniture, china, or portraits, but the soccer net found sitting in a garden as you look out the window. The glass light fixtures in the East Room were amazing. And, the portrait of George Washington in the same room that was the “only thing” that survived when the White House burned down was also an interesting site. 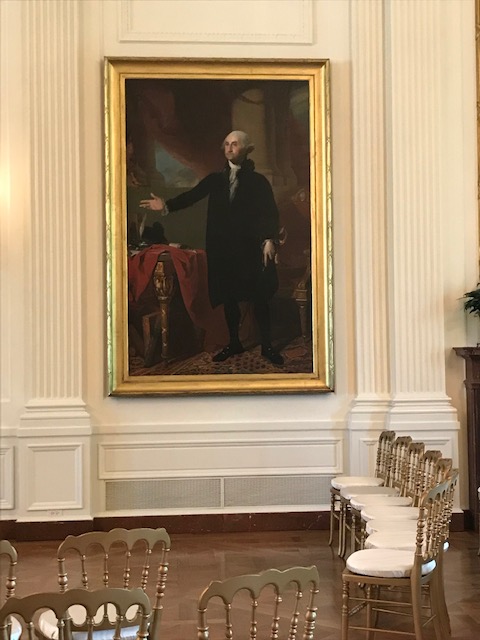 When we arrived at our Congressman’s office after the tour, I hope they did not think us impertinent when our reply to what we thought of the White House was “okay.” I do not know what we expected or what I failed to remember from when I visited forty-plus years ago, but it was disappointing. 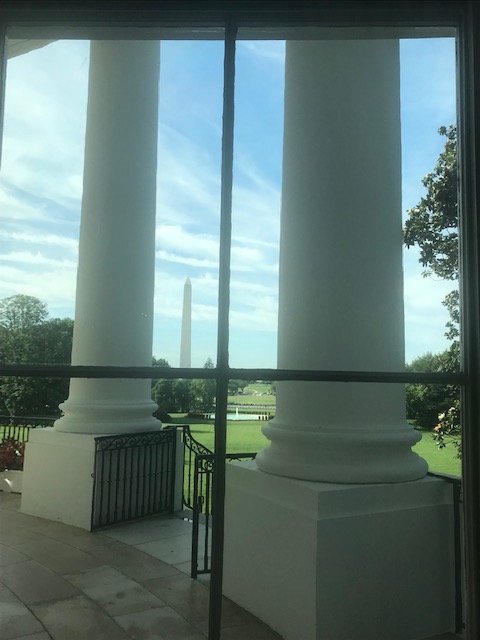