Ten years ago I had my Evergreen Garden Club students participate in a large Citizen Science Project. It was co-hosted by Monarch Watch and NASA (yes, that NASA). Monarch larvae were sent into space via the space shuttle to arrive at the International Space Station. At the same time, project participants, including those in my elementary garden club (who I had enrolled), raised monarch larva at home or at school with supplies sent from Monarch Watch. The supplies included monarch larvae (I forget the exact number of caterpillars we received, although I want to say it was nine), and a special “food” which was apparently, the same food given to those on the space station.

There were experiments to be conducted, which the garden club students in grades 2-5, conducted. Measurements were taken, and other types of observations were noted. At the same time, the scientists on the space station were monitoring their monarch larvae. The question to be investigated was whether being in an anti-gravity environment would affect monarch metamorphosis. Certainly, here on earth, in the Evergreen Elementary LMC, we knew that gravity played a part in the metamorphosis. Our caterpillars (or larvae) pupated and metamorphized in the LMC of our school – for the whole student body to observe. Garden Club Students, in the upper grades, were given the responsibility of checking on the status of the larvae, pupae, and subsequent butterflies. I lived close enough so that I could check on the enclosure. 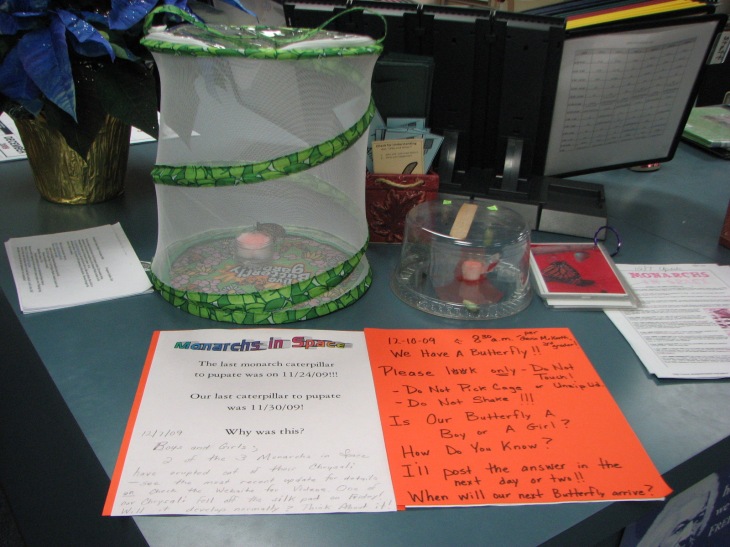 I distinctly remember that we had our last butterfly from the Monarchs in Space program “born”  on December 10th, 2009.  (It is a family member’s birth date.) I received a call from the librarians, both of whom I am friends with who  told me the butterfly was “out.”  I went to school in the late morning. And, I think we left it there for the day to let the students observe. Many of the elementary students, at that time, had never observed the monarch life cycle or its miraculous metamorphosis.  By leaving the Monarchs in Space larvae, pupae, and butterflies in the LMC, everyone got a chance to observe the changes. 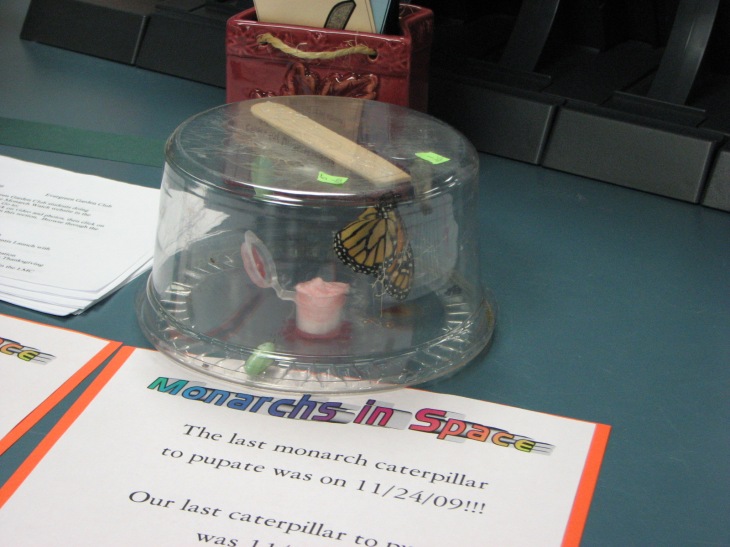 The garden club students had something more. They were the group of students that in the month of December in 2009, were able to actually participate in the observations and record, as citizen scientists, what Monarch Watch and NASA wanted us to make. It was a memorable experience for both me as a teacher, and monarch conservationist, and the students as observers of a “real” life science project supported by some very reputable sources/organizations.  And, who gets to observe monarch larvae in late November and early December???? As, part of this project, we did!

To make the experience even sweeter some of the photographs we took during the garden club meeting when we worked with the larvae were selected to be part of a commemorative poster!

Today, I was reminded of this awesome student learning experience I had the pleasure of allowing my students to participate in ten years ago.  We were citizen scientists! I am still a citizen scientist today. Tomorrow, I will speak to a group of students in a nearby county about citizen science. The reminder of this unique experience could not have come at a better time. My poster has been pulled out of storage and some photographs of the experience were sent to be printed.  I am energized by this memory and ready to present to a new group of eager students tomorrow. For if not Monarch Watch or NASA, there are many other opportunities to learn and contribute as Citizen Scientists.