As I have a student who will be graduating from high school this spring, I am interested in knowing the thoughts of others regarding the direction students will be headed after their graduation in 2020.

My soon to be graduate is strong in mathematics and art, obviously using both sides of his brain.  His propensity for mathematics that started in pre-school in an attempt to “catch up” with his two older brothers, waned over the years.  He was still going strong in middle school with an obvious interest in excelling by participation all three years in Math Counts Competitions (math for fun – really!), creating origami models, and quiz bowl. But, by the time high school and pre-calculus as a ninth-grader rolled around, his interest in the world of math had relaxed.

By that time, the origami had given way to intricate graphite and colored pencil drawings of people and sometimes, in the early days, animals. Mathematics was beginning to take a second place to the world of art, and we allowed it to happen.

Could our son find a future job as an actuary,  accountant, or even a math teacher more easily than as an artist in the future? Yes, almost certainly. At the outset of his high school career, we cautioned him to think carefully about his future path. “Remember,” we said, “you have to find employment when you are done with college.” So, we were inadvertently telling him to go a STEM (Science, Technology, Engineering, and Math) route.

But, as the last few years progressed, he’s produced more and more incredible art. Drawing led to painting, and now, more drawings. Of course, I’m biased here; I am his mother, after all. But, my opinion has been reinforced by others in the community and even the world beyond our town. It’s gotten to the point that its hard to deny his talent and ability. Yes, he’s still got mathematical talent. But, the difference is that he works daily (for hours) at increasing his artistic skills and enjoys spending his time that way, too!

This is called passion!! His passion is exhibited by his intense commitment to pursuing his art on a daily basis. He is working towards his dream of being an artist.  It’s evident he works hard, he has talent, and he is committed to becoming better and better at his craft.  As his parents, my husband and I really have no choice but to support his dream. It is the best we can do; it is what we need to do!  Others, in our community, have expressed interest in his art as well. With winning the Congressional Art Contest for our representative’s district last May, a publically painted local mural, and several commissioned works, along with promotion through the help of Instagram and TikTok platforms, he is making a name for himself, already.  It’s scary and exciting all at the same time! 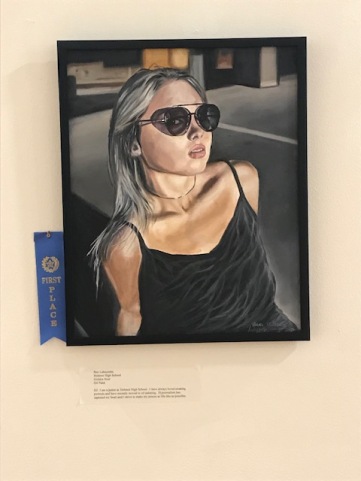 “Golden Hour” Wins the Regional Congressional Art Competition for 2019. On Display in the U.S. Capitol Building.

Yes, he’ll still have to find employment after college. But, we’ve come to the realization that while he could be great at anything he chooses, he has a passion for creating, expressing, and sharing his art.  I do not think it is arguable that kids today are under a lot of pressure. No doubt having the ability to pursue one’s passion in this type of world is a gift. Probably, one of the greatest gifts of all.

Today is Slice of Life: Tuesday. This is a forum hosted by TwoWritingTeachers.org blog what encourages a willing community of educators and writer’s to share their passion for the written word. I have participated in this group since March of 2017. Thank you for offering a supportive, encouraging atmosphere.