Today’s been busy. Although I really did not have time this morning, I took to the yard to photograph the stunning scenery brought about by a very cold night and high humidity in the air. (I know this seems like an oxymoron and maybe, it is!) After waking around 6:30, having breakfast and cuddling with Molly, our dog, I, unfortunately, returned to bed! The sun was up but we were shrouded in a cloak of mist that gave the yard and world just beyond a beautiful but somewhat creepy appearance. Admonishing myself around 8:30, with camera in hand, I took to the yard for some photographs. It was still beautiful but the mist had given way to bright blue skies. My husband, who returned from a walk with the dog an hour earlier, suggested I head outside to photograph some of the trees laden with a visible layer of ice crystals.

But, I’m getting ahead of myself. My first step was to take my DSLR out of the camera bag and click a few photos from inside the house looking out.  It’s kind of an odd thing to do but since it was -0 this morning (that is exactly how my phone reported the temperature – not making it up), I wanted to make sure everything was in working order before I ventured outside.

Luckily, our windows fold outward and I was able to fling it wide open o it was almost perpendicular to the house, giving me a nice view of the old creek bed and cemetery across the road. Knowing my camera was in working order, and beckoned by the glistening ice on the branches against a cornflower blue sky, I bundled up and went outside.

So, I went in and grabbed our little Canon point and shoot camera. It takes great photos and at least I would have some without the black “speck.” But, now I noticed that I had trampled the snow where I had been able to take photos just a few minutes earlier with it untouched by my passing.

“Really?” I asked myself. “I ruined it!” This was my reaction to seeing my own boot prints in the snow. Oh, well; time to give up. 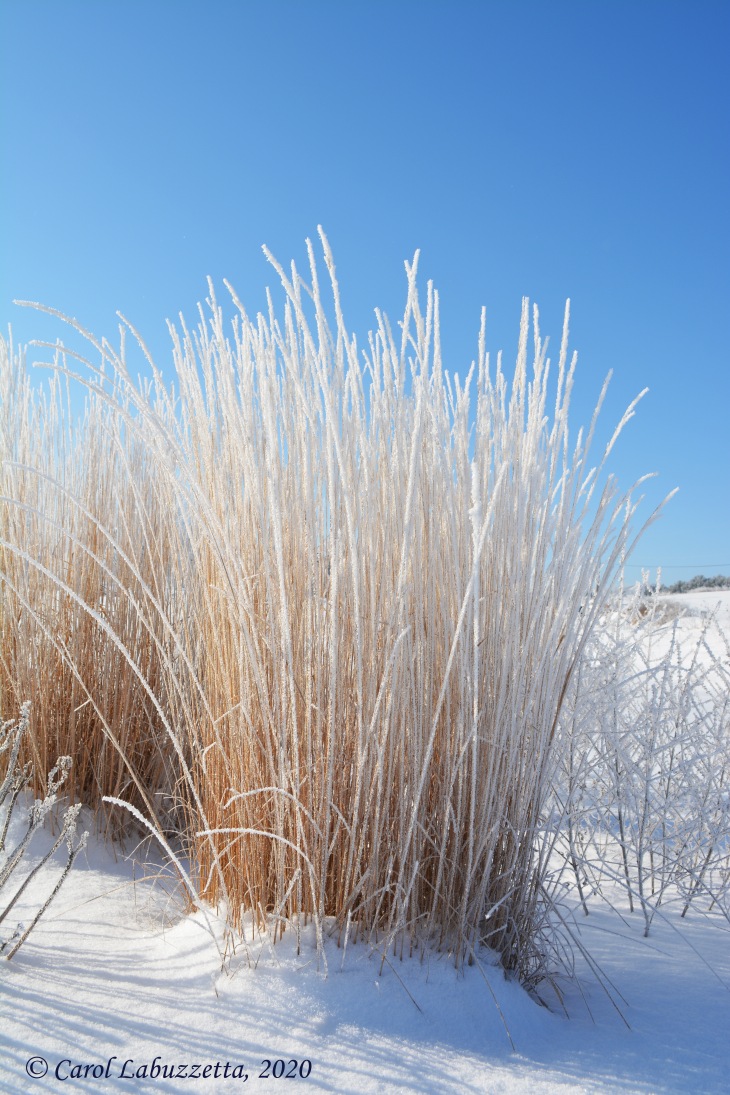 Exasperated, I took a few more photos and went inside. My hands were freezing anyway. I also had scared the big hawk that was sitting in the old creek bed tree.  So, I reluctantly put in the chip from my first batch of photos, shot with my Nikon 5200 DSLR.  Guess what?! No black spots! I was thrilled but the photos also did not capture the glistening of the ice and snow on the branches or grass. I knew then I had really missed my window this morning.  I also knew that although I thought I did not have time to take the photographs, I really did. I made the time.

The photos from the little point and shoot Canon were not bad either. Actually, I think some of them rival the Nikon. But, it was a beautiful morning scene and I am lucky to have been able to view it, even though I was a bit late to the party!