Words need more substance than just inclusion in verbiage. There needs to be meaning AND intent behind them.  While in grad school for my Environmental Education degree, we were asked in one of the theory courses whether education (about the environment) is enough (for community members). Is knowing about environmental problems and issues like the rapidly diminishing biodiversity, possible extinction of key indicator species, the loss of habitat enhanced by rapid human development, plastic pollution, water shortages, and so on enough to force the citizenry into action? We had to write an essay that took a stance on whether or not we thought education was “enough.”

Being a person who, throughout my life has highly valued education, I thought at first, yes – education is enough. But, after a great deal of reflection as I read through scholarly articles, I concluded that I was wrong. Education alone is not enough!  Education needs to be followed by action. And, this is what I believe today.

In the rapidly changing educational systems and community, many actions are being taken. Some, as they have been for years, are band-aided solutions that consist of adding a popular word or phrase (also known as jargon) here or there in system statements and documents.  The intentions behind adding these words, examples of which are included in the word cloud below, are admirable and well-meant.  HOWEVER, the action of revising documents to include new educational “catchphrases” cannot be the ONLY action. In other words, if you are going to talk the talk, you must walk the talk.

All too often, systems get caught up in the bureaucracy of process, order, and paperwork. By the time true action is required, there is little energy left for the implementation of the well-intended “new” ideas or words. In my 21 years of involvement in educational systems, I have seen this over and over.

Stakeholder involvement MUST take place at the beginning. It cannot be as an afterthought or after being demanded by those stakeholders wishing involvement. IF stakeholders are included at the outset of decision making (before decisions are made), then TRANSPARENCY is greatly increased. We need transparency.

I asked (boldly) at a meeting two years ago where trauma-informed education was being discussed as a new model to follow, what would happen if the trauma occurred in the system? Or, in the school?  Or, more horrifically, was inflicted by staff?  I still want to know. It seems to me that some real traumas are occurring within systems. I know of one that occurred to one of my boys. It was an inexcusable use of emotional inflicted trauma that greatly affected his self-worth and confidence.  Nothing was done.  Nothing.  School was never the same for him after that.  Do you see what I mean about the intent behind adding words or catchphrases? There must be action. The words mean nothing if not backed by actions that support the words being there.

Last night, three brave and well-spoken students asked our board of education and district leadership to define the word equity BEFORE it is added to the district’s new Mission and/or Vision Statements. They are politely asking what it means for them, and for their fellow students. They are right to do so.

The other remarkable thing the students asked was that MORE than education be done regarding bullying and discrimination through the use of racial slurs. They noted, by their own observation it seems, that education is not enough when it comes to stopping the use of this type of discrimination. They asked that something more, some consequence, or some even discipline be given to those who incur an infraction of this type. Education alone, it seems, is not enough.

I liked what I heard last night. Students were standing up for what they saw were needs, their needs, from our school district. I also like that they already understand the concept that corresponding actions need to follow words, statements, meetings, or conversations. I hope they get what they want. 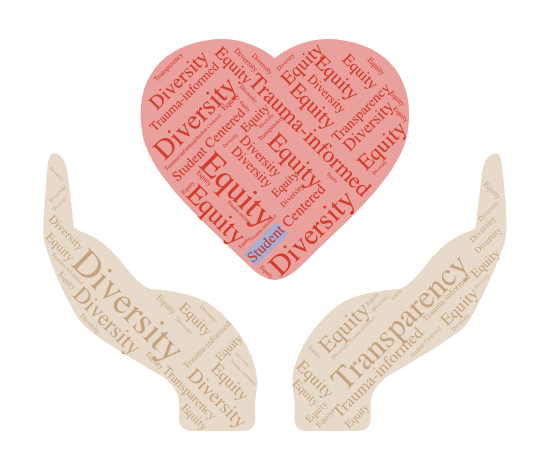 Today is Slice of Life Tuesday. Thank you to TwoWritingTeachers.org for providing this supportive forum for writers!