One of my son’s friends tells him I am always “shouting” about butterflies on my social media pages. Shouting might be a bit of an over-exaggeration, but I do have regular posts on this iconic species.  I have been involved in Monarch Conservation for almost 15 years now, long before it became a popular thing to do or say you are doing.  Raising monarchs during the summer has become part of my life, a part I have learned to share with others in order to educate, inspire, and call to act.

As you might know from prior posts, the summer started slow with my first Monarch Butterfly sighting being after the July 4th holiday! This is very late for the upper mid-west and had me concerned. I found one monarch caterpillar in June, raised and released it as an adult butterfly. And, although this told me monarchs had been visiting my yard, I had not seen any flying about until early July.

Mid-July, I spoke at the Trempealeau Wildlife Refuge on Monarchs, Monarch Habitat, Milkweed, and the Monarch Highway – which is being enabled in states adjacent to ours but not within.  Sharing knowledge is part of the Master Gardener’s mission, so this fits well with my passion for the Monarch.

Shortly after that talk, I began to find monarch eggs in my garden – mostly on my common milkweed patch. I have never had good luck with raising monarchs from eggs, but I felt desperate to get my adopted summer family growing, so I collected ten tiny, pale yellow orbs – the eggs of the Monarch. On August first, I left on vacation, leaving my eggs to be watched by my adolescent boys and their Aunt. A week later, upon returning home, I still had ten eggs! Whoo-hoo! I was very excited. And, I think my sister-in-law was relieved.

As those eggs started to hatch, I started to find more caterpillars of various instars (size stages) in my milkweed patches. I brought those in as well, separating them from the ten tiny caterpillars that were rapidly growing.  As of Monday, this week, nine of the ten egg raised monarchs had pupated, eclosed, tagged, and released.  Out of the other caterpillars I found, 8 are now pupating and one is getting ready to do so.  Inspired by another monarch enthusiast, I looked on my plants again yesterday to find 3 tiny caterpillars on my rose milkweed, one on my swamp milkweed, and one larger caterpillar on my common milkweed.  I brought those in to join my growing family that resides in the laundry room.

My aim is to use all 25 tags I purchased from Monarch Watch earlier this month.  This is the third year I have tagged, and my most successful year raising monarchs from eggs. 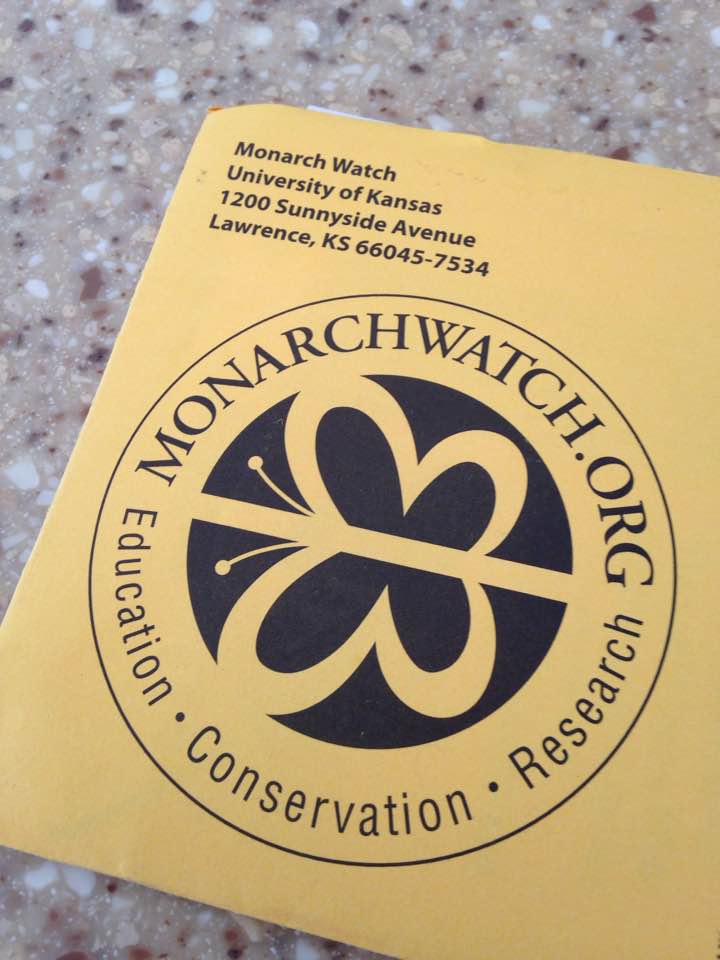 Lastly, I have been able to make plans to do more sharing of my knowledge of the Monarch Life Cycle and their habitat needs in the coming year.  If all goes well, I will be reaching more people in our community – both children and adults, alike – with my Monarch message and mission to help sustain this iconic creature.