Just over a year ago, my husband bought a 3D printer for our house. Really, it was bought for my 18-year-old who will graduate from HS in a few months. He’s our inventor, our experimenter, our dreamer.  Over the course of the last year, he’s put the 3D printer to good use.  He played with it enough to learn how to use it well. He’s read tutorials, been on forums, and even fixed it a time or two when one of the axis’ seemed off or the thermostat was not functioning. He’s patient. He is persistent and he perseveres. He’s self-taught. And, he’s great at using the printer, the software that goes with it, and our CNC machine – another “toy” out in my  husband’s shop. 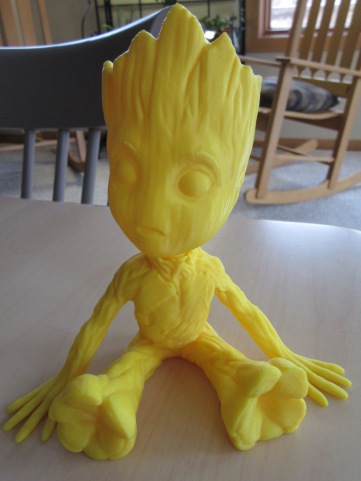 Miniature versions of Groot have been made, some to keep and some to give away.  Car parts have been made as a custom order from a referral made by a friend at the high school. A vacuum table accessory has been developed and more, just by learning and persisting with a new tool, new knowledge, and practicing new skills. 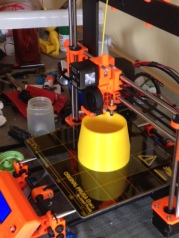 He did not give up when things got hard. Instead, he tried to figure out the problem – and fix it – whether it was software or hardware based. It’s been fun watching him learn with enthusiasm. 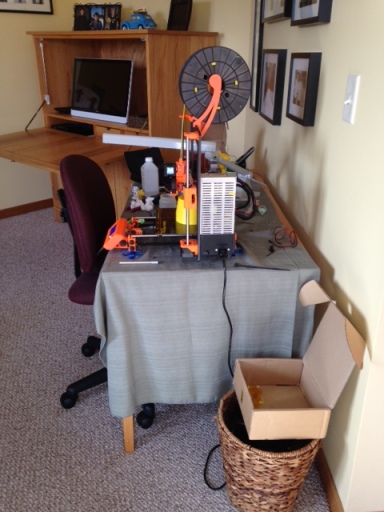 And, this experience says a lot about learning. None of the skills he is using are measured at school. There is nowhere to apply them there with the exception of the art class with a very flexible teacher who let him carve a notebook cover of a wolf instead of sketching one for his notebook.  That was so cool!  Even the computer science course being taken now and the AP physics course of last year did not allow application of these skills.  But, he learned them anyway – because he wanted to.  Free of grades, free of judgment, free of the demand to be “right” with his answers every single time.  It seems he has been able to go beyond the walls and narrow tunnel traversing that traditional teaching and learning environment. Instead, he has become able to direct his own engagement in absorbing new material and the manner in which that is done.  The 3D printer and our home maker space has allowed my son to feel accomplished and have pride in what he has learned and produced.

School used to be the way kids obtained these feelings about their skill sets. Maybe it still is the path for “in the box” thinkers or traditional learners. But, the ability to think critically. learn from one’s mistakes without fear of a poor grade or drop in GPA, and continue forward, are traits we want all our children to have by the time they are adults. Where they acquire them should be secondary.  The home maker space, 3-D printer, CNC machine (on which he is also self-taught and produced products), and table saw have been essential for learning and making our son not only college ready,  but life ready.  I am glad we could provide these tools. He’s used them well with only the guidance of his own intelligence, drive, and dreams.

Now we have in-depth conversations about the synthetic production of body part replacement or web-based companies for products made on these machines that he has continued to master.  He is inspirational.  He is a new breed of learner.