I consider myself to be fairly literate with technology. After all, I am completing an online degree, had a child graduate as valedictorian from a virtual high school, write a blog, upload papers to dropboxes, access online grade books, adjust my photography with photoshop, and use a smartphone. Heck, I even learned to use qualtrics software in the last year to send out online surveys.  I do okay for a middle-aged lady.

But, I do not use a lot of apps.  When I went to California last week, I found myself a chance to learn to use one of the major transportation apps, otherwise known as Lyft. My plane arrived two hours prior to my sister’s at the Palm Springs airport. By the time I saw her walking toward me down the corridor in baggage claim, I had scoped out the taxi stand and how it seemed to work.

She had other ideas. “Let’s use Lyft instead,” she replied to my information on the availability of taxis.

“Okay,” I warned her, “you’ll have to manage that though I have no idea how to use it and don’t have the app.”

“Sure,” came her reply, “It’s easy. I’ve used it before.”  And, less than ten minutes later, we were in a car, traveling towards our hotel. When we arrived at the hotel, I was digging in my purse for money to tip the driver. My sister simply got out and thanked him. So, I followed her lead. As soon as he drove away, I said, “So, obviously, payment goes right through the app.”

My sister replied, “Yup, and that’s the way you tip, too. There’s no exchange of money in person.”

Cool! I really liked that aspect. There was no exchange of paper money or pressure to tip.  We did tip all but one of our drivers over the time we used Lyft in So. Cal., but it is done right through the app, after you have been dropped off and can think about it.

Most of our rides were 15-20 minutes long and cost between 15 and 20 dollars. The cars were immaculately clean, which I am sure is part of the driver agreement. So, starting Wednesday upon arrival to Palm Springs we used Lyft to get into town for dinner. But, where you go, you need to return from. So, conservatively, it probably cost about $32.00 a day for us to move about and not be “trapped” at the resort – which in hindsight and with lower temperatures probably would have been fine. If I consider the area drivable that I am traveling to, I would still rent a car. Price wise, it could be comparable or even less expensive.  But, my prior experience told me that So.Cal. is heavily trafficked.

Since the Lyft app was on my sister’s phone, I let her call and pay the drivers. I, then, paid her for one of the trips each day. It worked well. Most of the drivers were pleasant and well suited for small talk that included where we were from, why we were in Palm Springs, the hundred degree weather, droughts, and more. Nothing discussed was too personal. I would imagine much like a taxi cab ride.

However, if you want to further compare Lyft to taxi cabs, I’ve listed some additional thoughts on the subject. 1) You actually know more about the driver before you get in his/her car than a taxi. Lyft supplies the driver’s name, license plate number, and car model, as well as how many passengers the driver can comfortably carry. 2) You are quoted a price up front, before you reserve your ride. I know when we took a cab in Bermuda, we were sure to ask the valet that assisted us how much we could expect to pay for the ride from downtown Hamilton to our resort in South Hampton Parish. We had no idea, so we asked beforehand. With Lyft, the information is supplied to you. 3) Again, to reiterate, payment is all done through the app. You do not hand anyone cash or your credit card. And, there is no pressure to tip at the conclusion of the ride because you have time when you are at your destination to decide about that. 4) You can follow the driver’s path on your phone during the ride (if you so desire). 5) You can rate your driver/ride, if you desire, to provide feedback and inform others.

All this said, using Lyft was a great experience. My husband and I had talked about these services (Uber/Lyft) prior to my leaving for California. We both decided that if one was with another person, it seemed like a reasonable thing to use. Traveling alone, neither of us were too sure. But, when it came time for me to leave (a day before my sister), I had to find a way to the airport. The resort did not provide a shuttle service. So, I was left with using Lyft (as a single passenger) or calling a cab. 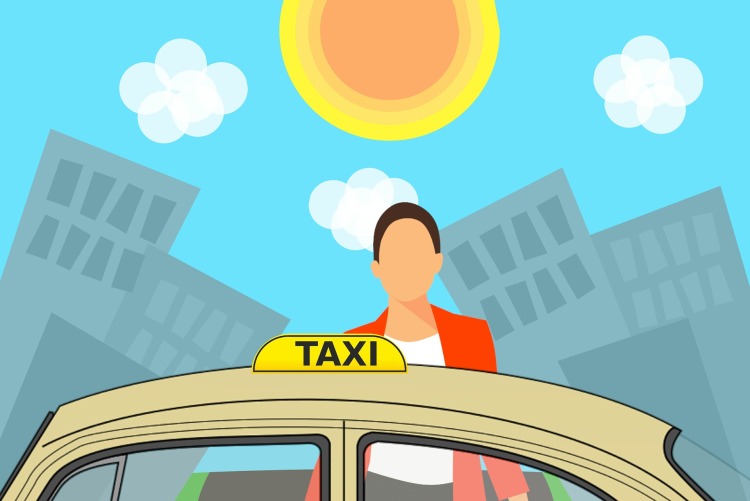 I chose Lyft. I downloaded the app and the night before I left, we used my phone to call the Lyft driver and make sure the app would work from my phone. I have an older iPhone and it can be “quirky” at times. But, it worked fine for our dinner excursion to a fine Italian restaurant. So, I felt confident about using it on my own the next morning to leave the resort.

I said good-bye to my sister and called the Lyft using my app. It arrived less than five minutes later, which was our experience for all of our rides. However, my first (and maybe, only) solitary Lyft ride was filled with challenges that my sister and I did not experience in the previous three days.  First, the car while clean, smelled heavily of smoke. I have a very sensitive olfactory organ and can detect the faintest of odors. There was a definite odor of cigarette smoke. Not good. Secondly, the driver was non-conversant. I am more of an introvert myself, so I can understand. However, being a driver does require an ability to make small talk if you want your passengers to feel comfortable. There was none. I later determined that English was this gentleman’s second language and perhaps that is why he was quiet.

But, the really concerning part of the ride was when he drove past the airport entrance! What?! Where were we going? I immediately started jumping to conclusions…..I was in trouble. Where was I being taken? Was this guy some part of a human trafficking ring? I glanced at my phone which showed he did, in fact, pass the entrance to the airport! So, I immediately spoke up.

“Sir, I think we just passed the entrance to the airport.”

He responded in broken English, “No. There is another way in.”

“Okay,” was all I could muster.

As we drove around the corner, I could see more signs for Arrivals and Departures at the small terminals that exist in Palm Springs. But, he wasn’t slowing down! Again, I spoke up.

“Sir! This is where you need to turn to drop me off.” My voice was tense. He turned. But, then he drove towards parking not towards the drop off for departures. Around we went again. When he pulled up to the doors, he said, “This is my first airport trip. I did not know where I was supposed to go. Sorry”

Ugh! Really! Well, it all turned out okay. I had plenty of time to check in for my flight. I was not kidnapped. I was safe. The driver had some experience getting to the airport now. But, he did not get a tip, nor a great rating. I have decided that I’ll use Lyft again. It was a great service (for the most part). But, I’ll probably only use in the company of someone else, and continue to give myself plenty of time to get where I’m going!

Have you used Lyft or Uber? What has been your experience?