For a while now, I’ve had a private love affair. No one knows about it except for my husband! Yes! It’s true! My husband is the only one that knows I love the town clocks of the Rotary International Service Organization!

I think this love affair started in 2012 when we went to California for a Christmas vacation and stayed in Carlsbad. A day trip to La Jolla and Coronado drew my attention to these quaint iconic markers you’ll find just about anywhere in the U.S., and some places overseas.

Until this last Thursday night, my love affair was limited to taking photographs of the Rotary Clocks anywhere I happened to see them. This included our home town, as well as far off places such as Hamilton,  Bermuda. I not only have photos of the clocks in those places but also East Aurora, New York;  Clarence, New York;  La Crosse, Wisconsin; and other places I have visited. 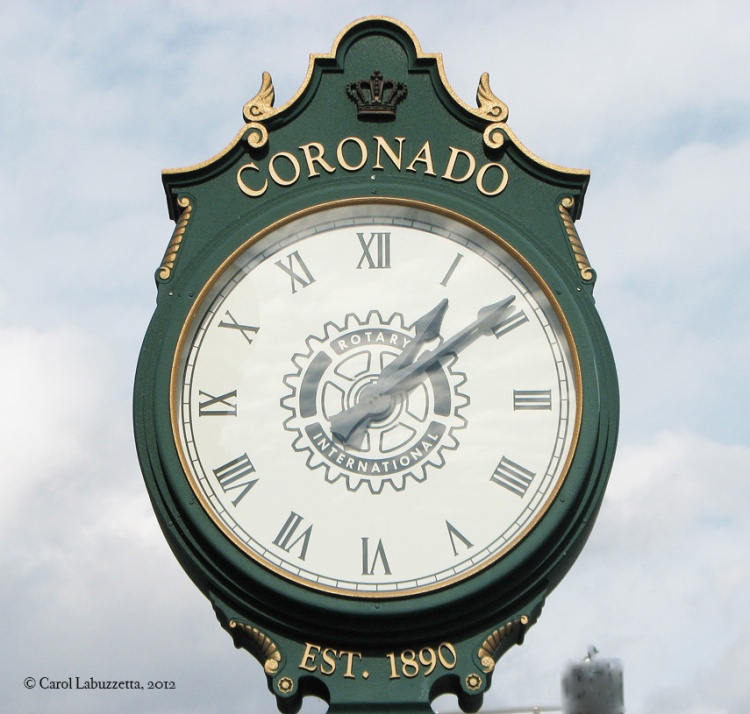 But, Thursday, we were invited to a Rotary Auction by a friend who helps to run the local arm of the organization. We have never been, so we gladly agreed to go. Wow! I have rarely witnessed such a successful event!  The tables in a large conference facility were filled. We signed in and got our auction paddle. Next, we bought an affordable strand of tickets for the silent basket auction. Then, we turned in a pebble (glass marble) to the bar for a free adult beverage. Next stop, the food table which was described aptly by our host as a heavy hors d’oeuvres meal. Soon, after there were some Rotary Introductions of our host for the evening – a young newscaster who is a second generation Rotarian and another gentleman who was the auctioneer. From then on, it was laughs and bidding wars interspersed with some more serious, but very brief talks about what this branch of Rotary has done and is doing. A past student talked of her experience as a Rotary Exchange Student and how it continues to enrich her life in virtually every aspect.

By mid-evening, everyone in the room had donated to the Purple Pinkie Campaign. This is a cool way of obtaining donations for a polio immunization program that Rotary participates in supporting. They want to eradicate polio across the world! As a former nurse, my heart swelled! As the children in third world countries are immunized against polio, they get a sucker. Well, suckers are tasty! Right?! So, they found that the children would get in line to be immunized again! As you know, that is not necessary. So, some very smart individual decided the kids would dip their pinkie finger in purple ink following their immunization to signify they had already participated! At $5.00 each, during the evening’s auction events, supporting the Purple Pinkie was fun, as well as gratifying!

My husband got into a bidding war with another gentleman to have our lawn cut, weekly, this summer. It was being offered by the friend who had invited us and while we bid sincerely, we finally let it go to the opposing bidder. The nice part was that the auctioneer did all the provoking of the audience to get the prices up. The Rotarians did none of that.

Fancy cakes were sold and resold after being neatly sliced in half and eaten, bringing in well over my estimate of a thousand dollars. Trips on a single engine plane and lake catamaran were sold. Jewelry,  pies, Wisconsin Badger Football paraphernalia, smoked meats, and Meals on Wheels were auctioned off. The baskets included wine and chocolate, pampered chef equipment, photography sessions, and more. These were held until the end of the evening, so most everyone had to stick around to see if they had won a coveted basket. There was a ring toss for bottles of wine and a luck of the draw card game for a pot of money.

Finally, on the table was an envelope marked with the projects Rotary is currently supporting. A water project in Lima Peru, an Orphanage Project, the student exchange, and others. It is there we made our contribution for the evening (other than supporting the basket raffle and bidding up the lawn mowing.)  Our gift was modest but as you know, if you have done any kind of fundraising, every dollar counts. I believe every couple at our table made contributions to the envelopes. This was a great, understated way, to contribute, as many do not want the recognition for their gifts.

At the end of the night, I came away filled with knowledge about what a highly successful auction looks like for an important service-minded, non-profit organization. I took the programs and a photo of the envelope for future reference. My mind is spinning with ideas. But, my heart was also grateful that we have such people in the world as my friends who work locally, but think globally. I will definitely going to the Rotary International Auction again! Fundraising for Goodwill and Peace around the world?

You had me at Hello!