Today.  I accompanied my son’s art class to the Science Center of Minnesota located in the city of St. Paul. They currently have an exhibit called Body Worlds. Since my son is an art student and going to take human anatomy next semester,  it was a trip he needed to go on. I, on the other hand, have a deep love of science and took anatomy and physiology at the college level as a nursing student.  I jumped at the chance to chaperone this trip when the opportunity presented itself Monday night at Parent-Teacher Conferences! 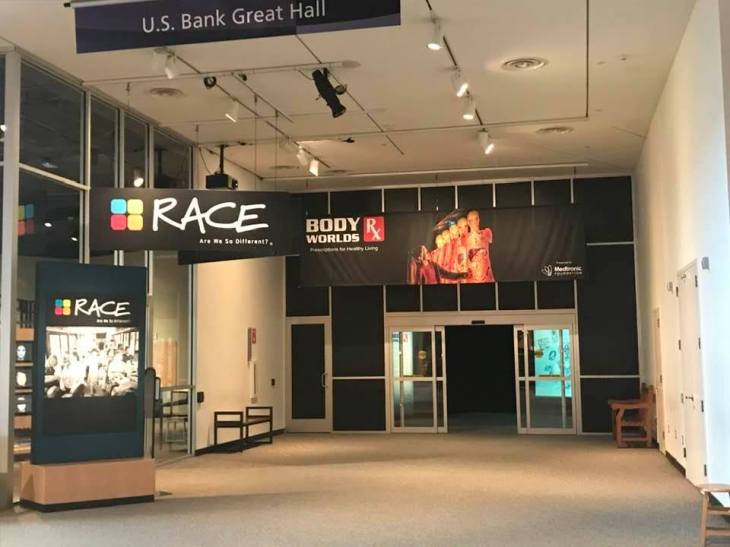 When my boys were younger, we decided to get back to New York State to visit family via Canada instead of traveling Interstate 90 which would take us all the way there easily, but somewhat on the boring side. Going up through Canada and around the northern side of the Great Lakes would allow us to see some new sights, such as the pine forests of Ontario. So, since we had already visited the Toronto Science Center, we decided to not go through Toronto but go through Sudbury, instead. There is a Science Center there too. It is called Science North.

I remember that this science center had a hands-on build your own robotic controlled car station that my boys participated in making. It also had tornado vortex’s in which you could insert your hand to change the direction or strength of the wind. The other thing I remember about it was a steam engine train that you could ride for a short distance. It was cool, yet noisy!  Our stay in Sudbury was not great, due to some hotel issues, but the science center was cool and provided a break in our long drive East.

So, today I went to another renowned Science Center, The Science Museum of Minnesota in St. Paul. Of course, it was a blustery mid-western winter morning which made getting there interesting. But, our bus driver was phenomenal and we arrived safely. The main reason for this trip was to see Body Worlds, an exhibit that shows the dissected and preserved human body organs and systems. The art class went to see the amazing human body in a new light. And, the anatomy class? Well, naturally, they went to see human anatomy! It was impressive.

And, that says a lot from a person who has taken college-level anatomy and physiology! Any prospective nursing or medical student should definitely see this exhibit (at several museums throughout the country). It helps with visualization so much! The fact that you can see internal organ systems and how intricate they are is incredible – much more helpful than a textbook or video.  The only thing that could possibly yield more information for a student is the cadaver lab.

I was particularly fascinated with the circulatory system and how highly infused with blood vessels some parts of the bodies are with these life-giving transport systems. The hand, for example, is covered in small vessels as my photo of the exhibit shows.

Other very impressive exhibits included vertical cross-sections of the body and the body shown in motion, like a javelin thrower. The layers, of muscle, tendons, nerves, and bone were slightly exploded out so one could see the intricacies of our amazing structure – the human body.

Of course, this was a science center so there were other awesome exhibits on “mad science,” sports, physics, mathematics, and yes – dinosaurs, too!  Other exhibits included one on race – what makes us who we are, and another featured the Native Americans of Minnesota – such as the Dakota and Ojibwe. There was an exhibit on Lake Itasca and historical geological features of the midwest.

I think my favorite was the Body Worlds exhibit. It was different, informative, and definitely interesting! I mean who wouldn’t want to peek inside our own bodies!

What science centers have you been to? What have you liked about the exhibits you saw?