My husband and I decided to try a cocktail today to celebrate a man’s life who died this week. He was 98 and known to drink Manhattans. Obviously, this strong alcoholic drink did not cause him an untimely death. Neither of us has ever had a Manhattan, previous to today. I did know an old family friend, “Mr. Miller” who drank them but he’s been gone for many years. I professed the fact that I would not like it.

But, this idea, to make the cocktail, coincided with my husband making Christmas cookies. He looked up the ingredients and as he ticked them off I stated that I thought we had all of them in our little-used stash of adult beverages.  As I went to look, I decided that it was the perfect time to clean out the cupboard. I have to confess here and say that we don’t drink much “hard liquor.’ My husband likes an occasional beer – Belgium wheat beers, in particular. And, I like a glass of wine such as merlot, malbec, or cabernet. So, out “stash” is somewhat old and untouched. There were several unopened bottles.  But, I did find all the necessary ingredients for a Manhattan.

So, after he finished making cookies, a cream cheese dough and jam-filled turnover, I found him rifling in the refrigerator for the maraschino cherries. We did not have any – I apparently lied earlier, not knowing we didn’t have these when I stated we “had everything.” Anyway, he made a manhattan. We both tasted it. Immediately, I said, yuck. He agreed, but it took him a few more sips.

Coincidentally this week, I bought some Ginger Beer. I was in the specialty section of the Beer and Wine part of the grocery store and saw some. It immediately triggered the memory of the famous Bermuda Cocktail, the Dark and Stormy, which is made with Goslings Black Seal Rum,  made on the island of Bermuda since the 1860s in a company started by James Gosling who landed in St. George’s Bermuda some fifty plus years before when he was trying to reach American shores from England.

Gosling started distilling dark rum and eventually sealed the bottles (after it was bottled rather than being poured from the barrels) with a black wax seal. Royal Naval officers soon found that adding a shot of rum to Ginger beer which was a common palliative for upset stomachs related to sea travel at the time, made for a tasty remedy and enjoyable drink.

All this doesn’t really explain the cocktail’s name, though, does it? And, when I think of Bermuda (I’ve been fortunate enough to have been three times in the last 30+ years), I think of clear skies, pink sand, and turquoise waters – nothing close to being dark and stormy! Well, word has it that the drink got its name from a sailor who said upon being served that the drink resembled a sky so ominous that only a fool would sail under those conditions!

The Dark and Stormy is still prevalent on the island of Bermuda. It’s evident when you visit. The drink is right on the menu is most of the pubs and restaurants. It is a popular imbibement among those who visit the island for sailing races such as America’s Cup that was held there in the early summer of 2017.  The drink is simple, requiring only the Gosling’s Black Seal Bermudian Rum, Ginger Beer and, arguably, Lime. Recipes can be found by searching Dark and Stormy on the internet. The one I used was on Esquire.com. There is another on Epicurious which I believe I have used once in the past. 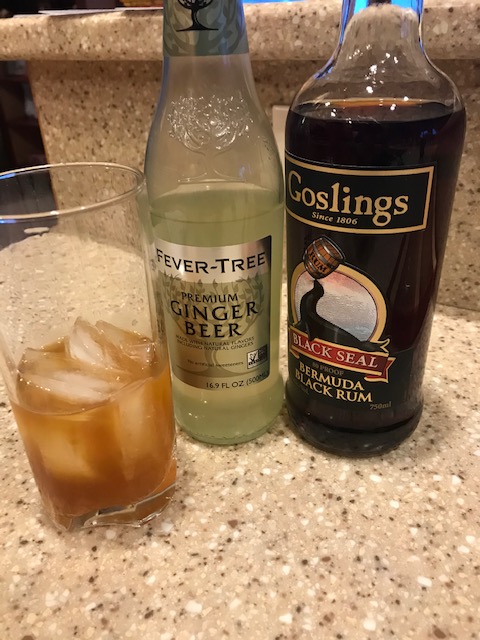 So, today, when the Manhattan fizzled as it sailed briefly over our taste buds, the Dark and Stormy prevailed. But, then again, you’re getting an opinion on a mixed drink from two who mainly enjoy a beer or glass of wine. And, those same two always enjoy anything Bermudian.