Yesterday, I was antsy.  I felt oppressed and unsettled.  Being housebound is not going to be easy for me, as I like to run my errands, visit friends for a cup of coffee, have breakfast out with my husband, and even go to the Y to work out.  It’s starting to sink in, this common problem we all have.  To avoid too much contemplation about the situation or future plans which we cannot control right now, I decided to bake a cherry slab pie!

We have lived in this house since 2007. Shortly after moving from the other side of town to a place with more acreage, we planted fruit trees. Now, more than ten years later, we have over 30 trees bearing various delicious and sometimes finicky fruits. Besides several varieties of apples, we have sour cherries, three varieties of plums, and pears.  Unfortunately, due to weather events, probably brought about by climate change, the pollination of our trees has been off.  The last great harvest we had was 2015!

This isn’t to say we haven’t had any fruit. We have, but not much. The cherry trees usually provide us with such a bountiful harvest that we have enough to share with several other families.  But, last year, we harvested about 4 cups – that’s all. I purposefully pitted and preserved them in the freezer to save them for an unsettled late winter day, just like yesterday! 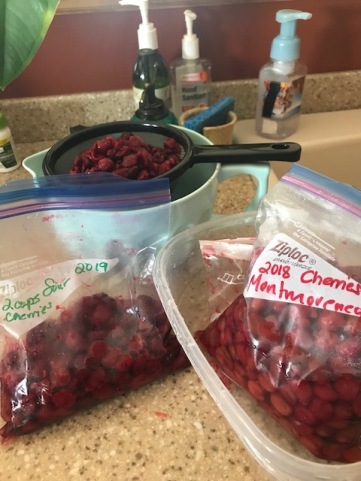 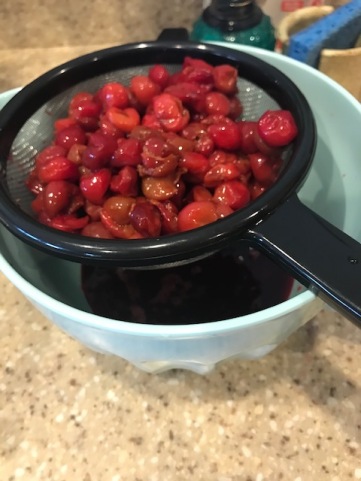 Mid-afternoon, I pulled them out to thaw, along with a lone bag from 2018. I had about 7 cups of frozen Montmorency cherries! Next, I pulled out my recipe for a Cherry Slab Pie. It is a recipe from the Smitten Kitten that adapted it from Martha Stewart. I have made it twice before. The first time turned out great; the second time not so much. Cherries can be difficult to work with in making pastries and pies. They produce a lot of juice and therefore can make a soggy pie. No one likes soggy pie – at least not in our house. 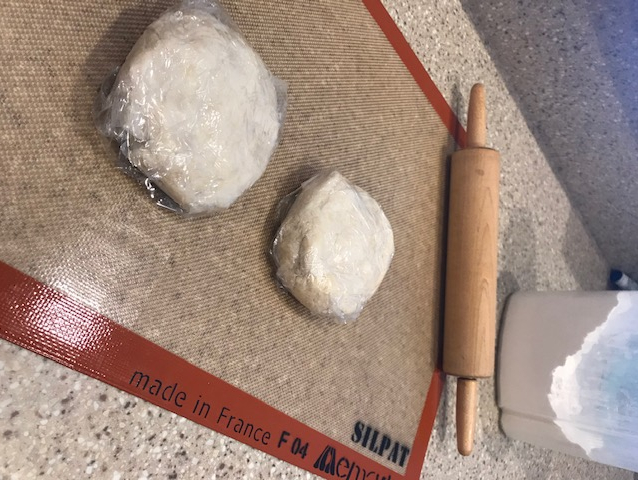 Knowing this, I dutifully thawed the cherries and drained them, producing almost 3 cups of juice! While that was happening, I made my pie dough from scratch. Since we recently stocked up on essentials, I knew we had what I needed. With the pie dough made, it went in the refrigerator to chill. The cherries continued to thaw and drain. In the meantime, I  assembled the rest of the ingredients.

By late afternoon, it was time to assemble the slab pie. The term slab only refers to the fact that instead of being made in a traditional pie tin, this pie is made on a small cookie sheet or another rectangular pan. I chose a glass casserole pan because my cookie sheets are larger than 10 x 15 inches, which is what the recipe calls for.

My first doubts about the success of this pie arose when I put the dough in the pan. It did not fit the way I envisioned, but aside from not having neatly crimped edges, it covered the cherry mixture.  Some of the cherry mixture liquid immediately seeped out to the bottom and I thought I was doomed!  Another soggy cherry pie! Oh, no!

But, it was not the time to stop! All that was left to be done was bake the pie! Almost an hour later, it came out of the oven without any further leakage! Ta-da! 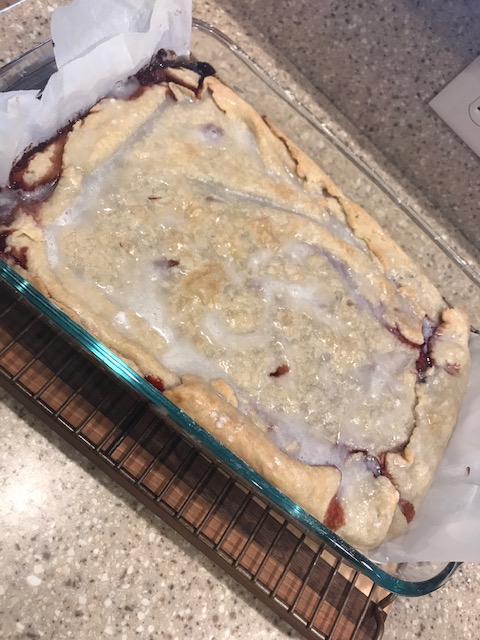 After cooling, I drizzled a glaze on top as the recipe called for. Around nine o’clock last night, we cut the pie! This was the final test! Would it be runny? NO! Success! And, delicious, too! 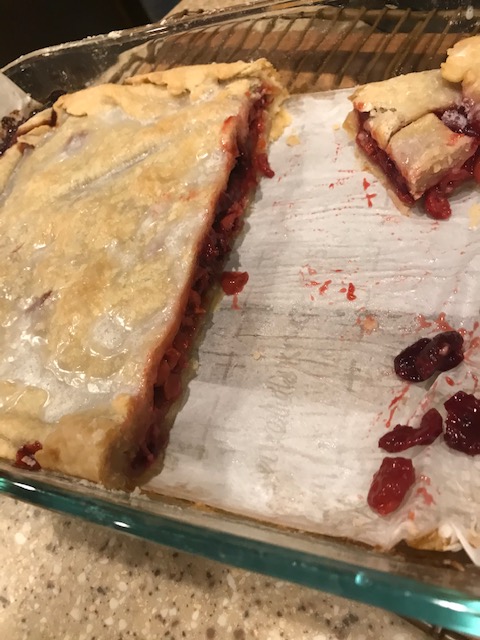 We had a delicious diversion on the eve of our Safer at Home order!