Today, I introduce a new series. It will join my Enrichment Posts, Have you Ever? and  Silent Sundays as a recurring themed post on my blog. This series will be called the Little Known Fact Series.

A few days ago I drove across the northern part of Wisconsin from our cabin to an art gallery in a town called Amery. Our cabin is in the north-central part of the state, while Amery is on the north-western part of the state. My husband’s smart phone GPS guided me on the way. While traversing our State, Keith Urban’s throaty singing and guitar skills on his older CD – Golden Road – kept me occupied. It is a beloved CD and I alway enjoy listening to it while I travel on the open road.

Wisconsin is beautiful. Growing up in New York State, I never imagined living here. It was as foreign to me as Russia!  But, having lived here for almost 20 years now, I really have a hard time thinking about living anywhere else. Don’t get me wrong, New York State has its beautiful areas as well – the Adirondack Mountains, the Finger Lakes, the Southern Tier – where I first went to college, New York City with all its culture, lights and excitement, the varied architecture found in the great City of Buffalo,  the mansions of George Eastman, and the lilacs blooming in May in Highland Park in Rochester or Strong Memorial Hospital, The Strong Museum, and the University of Rochester all cannot be beat in my opinion.

I’ve also lived and or worked in Maryland, Delaware, and Pennsylvania and there are great attributes to those places as well. But, Wisconsin has won my heart. The diversity of landscape from the Bluffs and Coulees in the Driftless Region, unaffected by the last push of the receding glaciers during our most recent ice age, to the flat open prairie you find just up the road and a county over in Trempealeau where you can easily imagine hearty pioneers hunkering down during our harsh winters, or wildflowers covering acres and acres of land, and finally to the edge of the Great Muddy – with views that never cease to inspire awe. And, those descriptions just cover the part of the state where I live. One does not have to go far in Wisconsin to find a shoreline, either of river or stream, or even a Great Lake or two (Michigan and Superior). The quaintness of Door County is a constant tourist draw as is the heritage and history found in some of our largest cities, such as Madison and Milwaukee. 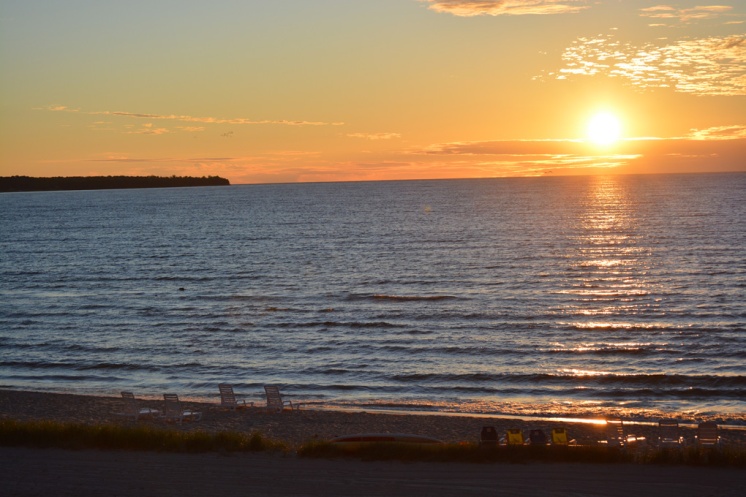 But, would you believe that there is a geographic wonder that connects where I came from and where I am?! There is! While living as newly weds in the Buffalo area, we made frequent trips to Niagara Falls. It was always enjoyable to spend an afternoon in the falls – either on the Canadian or U.S. side of the Niagara River. Some visits were more satisfying that others, of course, but the power of the water flowing over the gorge never ceased to amaze one upon sight! In The Falls, as any local Western New Yorker might call it, white water roars past and a lightest touch of a fine mist covers your skin, all while you stand by viewing water falls that were once considered a place one must see in the course of a lifetime.

The commonality rests within this place! The Niagara Escarpment is a little known 1,000 – mile cliff that runs from East Central Wisconsin to the great gorge yielding Falls in Canada and New York State.  Or, maybe the Escarpment runs from the Niagara River Gorge to the Door County Peninsula and into central Wisconsin! It goes both ways!  Not surprisingly, like the Driftless area of Wisconsin, the Niagara Escarpment was influenced during the last glacial advancement.  It was then that the escarpment was exposed and also then that the glaciers did not reach the driftless region – leaving such a topography that one can with a striking resemblance!

So, no wonder I love Wisconsin, there is much to remind me here of my roots! German heritage, impressive bodies of water, and the Niagara Escarpment and all the topographical wonders that come with it!  Who knew?! I am so glad I know this now!

As as far as the connection to the lyrics in that Keith Urban song, I think Wisconsin has some of the prettiest country from Niagara Falls to the Door County Peninsula. (Don’t worry if you don’t get this – true Keith Urban fans will understand!)

For more on this topic, you can consult the following resources: