Having just completed my second batch of Mexican restaurant-style salsa in as many weeks, I thought I’d post about it. However, this post is less about making the salsa than the drive to make it and what we found out when we went to eat it with some tortilla chips! Warning: Be ready for a shock!

This is the third week of our Keto/Atkins diet for my husband and I. We have both had weight loss and are still going strong with keeping track of our food intake and staying below 40 carbohydrates (carbs) a day.  We had a slight lapse on Saturday night when we ate at a friend’s house (six people total) and each had a tiny piece of Key Lime pie for dessert. But, we are still on track for more healthy eating and reaching our goal weights. 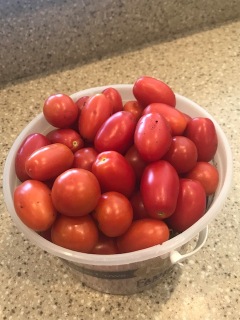 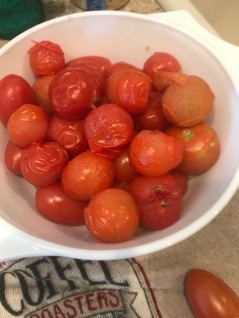 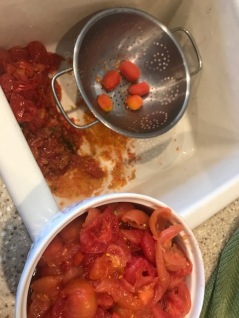 Last week, I headed out to our tomato patch to collect ripened cherry and grape tomatoes. When I came in with a huge bowl full, I knew I had to do something – really, anything – with them.  Thus, the first batch of salsa was planned. My first task was to find a recipe that I wanted to try. This was harder than it seems and, truly, harder than it should have been.  My go-to canning book really did not offer anything exciting enough that I wanted to try. Turning to the internet, I came across many salsa recipes. In short order, I came across one that had white vinegar instead of apple cider vinegar (which makes me think of dying Easter egg and is very strong, in my opinion). The ingredients were simple, as were the steps, so I tried the recipe from The Daring Gourmet. I had to cut the recipe down some due to the number of ripe tomatoes I had but the finished product was delicious!  My husband proclaimed it the best salsa he’s ever had! (Who wouldn’t like a compliment like that!) 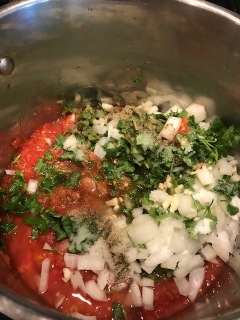 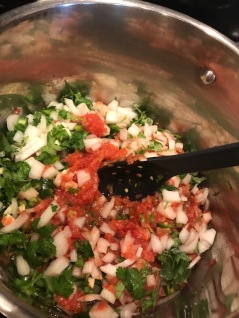 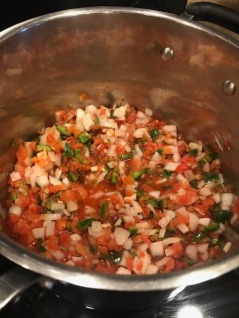 According to my palate, it was a little mild. I was careful with the jalapeno peppers, as I like more heat than other members of my family.  I vowed to add more heat the next time I made it.  So, today, I left more of the pepper pith and seeds when I added the jalapenos.  We will see if the extra heat is there! The peppers had me coughing while I diced them up! 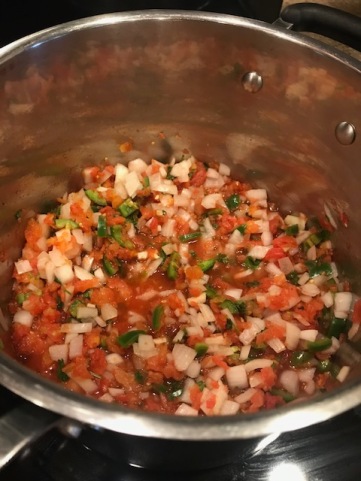 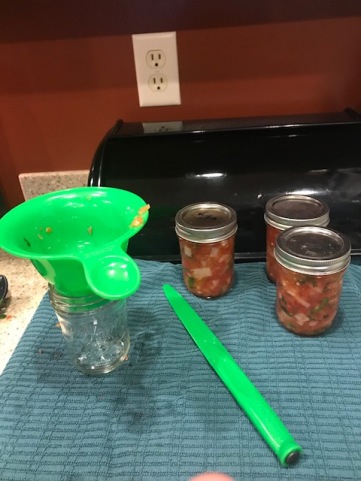 But, the true test of our diet came when we decided to have a little of the homemade salsa for lunch.  We each had two tablespoons and decided to see if we could add a few tortilla chips, as well.

Here’s the shocker, folks!  A serving of tortilla chips (for the above brand) is 10 chips! Not twenty, not thirty, not two or three handfuls, just ten! Talk about eye-opening!  And, of course, there were lots of carbs, (8 grams of net carbs per half serving) as well. So, my husband and I decided to have half a serving of chips each. Yep! That meant we could each have 5 chips!

Did we eat them? You bet. And, they were delicious with the salsa! Have we had them again? Nope! Did they throw our weight loss plan off? Nope. Will we have a half serving again? Yes!

The Salsa Making Take Away

But, the things we’ve learned from making salsa on a keto-type diet are that 1) yes, we can still enjoy tasty foods, 2) food made with fresh ingredients is more delicious than packaged foods and better for you, and 3) we were overeating!

Ten chips is a serving. Wow. Portion control is so very important, not only when dieting but when you are making a lifestyle change that involves eating.

Out in our vegetable patch, there are a plethora of cucumbers waiting to be picked. They were specifically planted to enable me to make pickles this year.  The first step? Finding a recipe without a lot of sugar!

The Keto/Atkins diet has worked well for us. However, we have tried numerous recipes that have been just so-so.  A cookbook I bought has been so disappointing that I’ll be leaving a poor review on amazon. But, fortunately, we found a website that shows promise. It is called Castle in the Mountains. The first and only recipe we’ve tried from their site was for a Keto English muffin that we used to make mini-pizzas. They were quick and not bad tasting!  I am looking forward to making more of their recipes.

But, for now, it’s on to cucumbers! 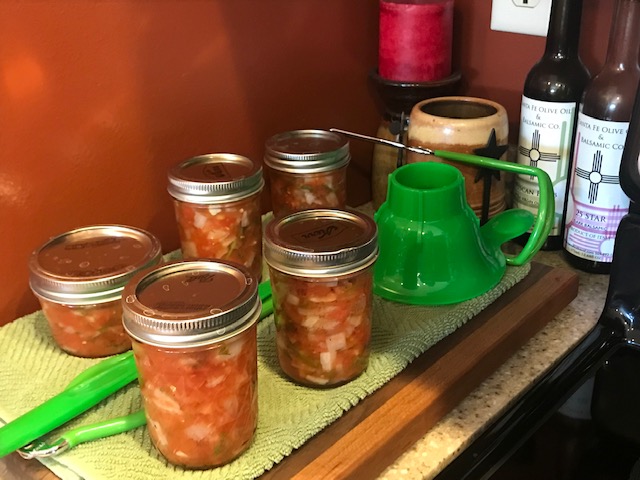